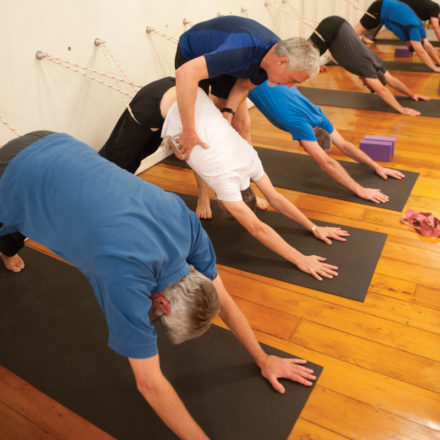 In fact all kinds of men do yoga!

Do you, your husband, your son, your father, your mate need to start looking after themselves?

Men often have particular challenges with yoga and in most regular classes are greatly in the minority. They may be strong, but are often less flexible and this can mean poses take a bit more time or need a particular approach. Geelong City Yoga’s men’s class focuses on addressing  these issues. Classes are taught in a challenging yet supportive, non-competitive environment.
FIND OUT MORE ABOUT MENS YOGA
OR CALL Tim 0419 313 677

“Tim Oddie – a Certified Iyengar teacher of 15 years – sees yoga as a powerful mechanism for investigating men’s health and identity. And he’s in a position to preach: for over 20 years he has commonly been the only male student in class; he has taught many men one-on-one; has instructed large private groups of men (including the Geelong AFL team for the past eight years); and he has consulted and encouraged yoga teachers and yoga studios on men-only yoga.

As is often the way, what started out as an exercise in commercial viability (i.e. how to get the other 50% of the population on a yoga mat) has moved to heart level and he cares deeply and passionately about fully and personally meeting the needs of his men.”